I remember that day vividly. On a warm summer evening in July, I was feeling a sudden inspiration all the while being over cumbered with grief from a broken relationship, to start a blog. I excitedly texted my good friend Jinny that I would turn my aching pain into words for a part of my story and she couldn’t have been more thrilled for me. Writing really is a coping mechanism for me to release stubborn emotions. I frantically searched and found multiple sites on how to set up a blog, etc. I picked a site, a name, and what my writing would be based on. I then took it to the next level and clicked on the plus icon to start my first post!

That’s when it hit me.

I knew what I had to write about. I suddenly felt less excited and more anxious and sad. If I were to get my message out there as well as my emotions, I knew I was going to have to face them.

I had to re-experience the pain, anger, fear, and sadness I felt about that broken relationship and to find a way to put them into words and share it with strangers. That was NOT an easy thing to do. I knew I had to turn to God and pray my heart out about it. As time went on, my heart was letting go a lot of intense emotion and I felt an overwhleming peace about my past.

I wrote about my pain and how I coped with it (only through the power of Jesus Christ). I wrote about the seasons I had experienced: my love season with God and the importance of singleness, the pain with dating and to watch out for wolves in sheep clothing, and eventually about my season of severe depression and where I considered suicide last year.

This post today is a loving one. A post that reminds my heart why I started this blog in the first place. I’m sitting here at my black kitchen table with a mason jar full of sweet tea, glancing over at my husband of almost 2 months, just thanking Abba Father above that every tearful, daunting, dark nights I cried from sadness, the days screaming in my car full of anger, and praying and worshiping until my lungs almost collapsed led to this: waiting is REALLY worth it.

I found the love I was looking for in a person, but it goes beyond that. I found someone whom I love getting to drink coffee with every single morning. Whom I love getting to pick groceries and figure out a budget plan with every month. A love that lasts more than a Sunday. 3 years ago I was broken, lost, and then found me. I fell in love with being alone and enjoying me. Now, I fell in love with my husband and never want to be without him. 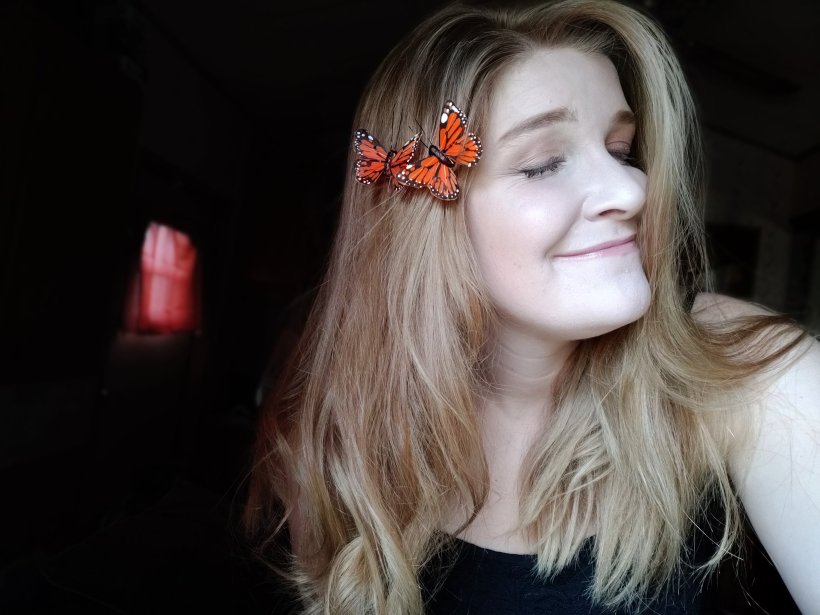 The sun poured into my window like a flowing stream

Its colors of orange and yellow bursting with gleam

I arose differently that day, as if I were on a cloud

No dark storm or aching pain could ever overcrowd

I swooped up the lace dress draped with jewels

Twirling and dancing as my feet hit against the toole

This day had finally come, the day I have dreamt

The man I was about to marry, who will forever bring my heart content

My life changing for the better, my heart at the fullest

My friend, my husband, my love of the purest bliss

I sat looking outside my frosted window; gazed upon a mother Sparrow with her babies

Three little beaks screeching loudly as they begged for their breakfast

The brisk, cold winds cutting against her wings like shards of glass, or a hungered predator feasting his eyes on her elegant colors that enticed all creatures wide

Yet she pushed through bravely and boldly; determined to return to her kin to make sure their needs were met before her own

That’s the Savior’s love for you and I. It surpasses all human comprehension and breaks all the barriers of life.

That Sparrow would have gave her life if it meant her children were loved and cared for, so how much our Savior has the same love for us. 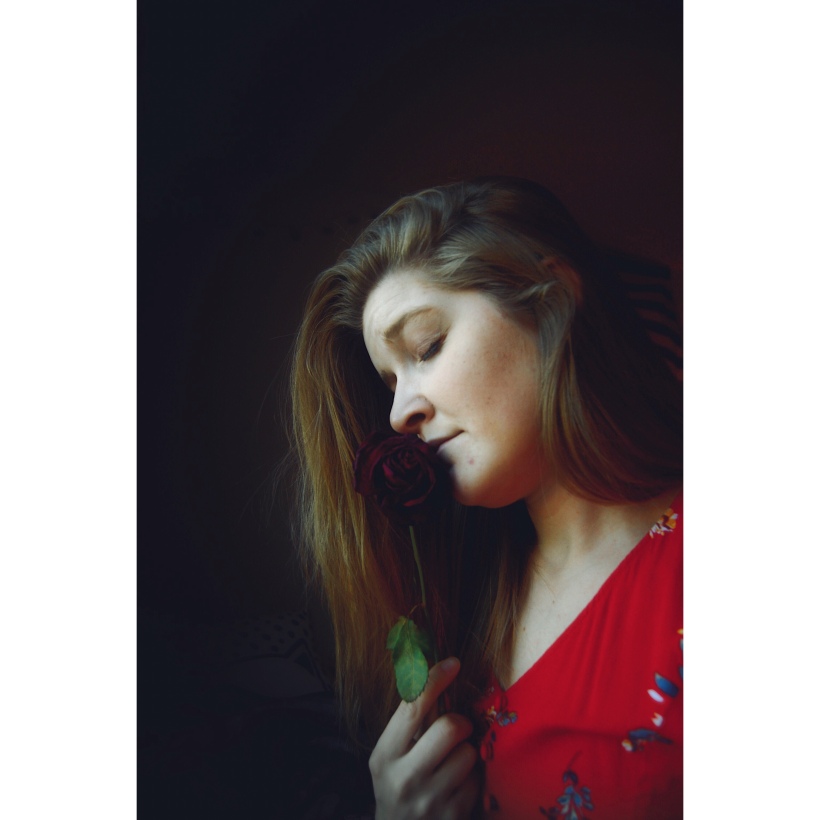 We become what we adore.

Isn’t that such a sinking statement? That whatever or whomever we invest our time into, we morph into what it is.

Some things can be full of life and vibrancy. Shaping our perspectives and growing our minds.

Others… can slowly, secretly, and painfully begin to kill us off. Until all that is left is our burnt ashes.

Adoration is a dangerous plateau. It makes our heart yearn after whatever or whomever we want to fulfill our desires. We can put a hold on things that once captured our hearts in a positive way.

Mine was walking outside watching the wind dance with the tree branches. I watched as the sky kissed the lake beside me, two lovers that no storm or skipping rock could break apart.

My mind became dark once I stopped seeking the light. That’s the thing about wandering, often times you begin to get lost. You can allow infatuated adoration consume your soul and churn your blood until it feels cold.

I’m ripping layers of sinful adoration off of my dry skin. New layers are being purified, hardened, and built with a tactical protection so that I can never latch onto what was trying to destroy me again.

I adore my Love, the One who saved my dead soul. He gave up His life so I could keep living mine. In His shadow I’ll forever be safe.

Dust. Dust swarms around all of us. It creates thick and clumpy colonies in the darkest parts of our homes. Observing dust we can see the tangled cobwebs and particles collected over time. I am writing about the dust because my heart has been encaged in it.

I have allowed my heart time and time again to slip into the silkiness of sin, at first feeling comfortable and beautiful, but then the silk starts to itch and stick to the bareness of my skin.

I couldn’t escape the cobwebs entangled in my soul. I wanted to run away. I wanted to do anything to make the pain stop. Some points at the end of last year I gambled how much my life was worth and considered ending it.

My sight became foggy and unclear.

My skin cracked and bled.

I thought it was done. I thought this was the end. I thought my life had said its Adieu.

And through that blinding pain and array of silence… I felt the touch. A touch that was able to penetrate the gnawing agony drowning my brain.

I know the Lord has been patient with me. He has interceded through the stickiness of cobwebs in my soul. He’s breaking any fabricated thought the enemy has created and I have kept believing. I am pushing through this.

You may have just rang in the new year surrounded by good friends or loved ones, just anticipating that glowing ball on your tv screen to drop as your heart feels so much hope and relief that a new year is coming. 2018 has officially said its Adieu, and a clean slate has been established.

I know, myself, I was so happy, actually ecstatic to see 2018 end and 2019 begin. There is just a huge importance to factor… New Years Day isn’t just a holiday to drink blatantly or make one month commitments. It’s a new year, a new beginning, a free do over from any bad mistakes from the previous year.

You may have woke up and feel just the gnawing pain that 2018 brought upon you. Don’t fret…. God has you alive another year because He isn’t finished with your story. I wish you all the best year! A year of growth, success, love, forgiveness, and peace.

Author and Creator of melrosejordan.blog

“Now faith is the assurance of things hoped for, the conviction of things not seen.” Hebrews 11:1 ESV

The call came. The words that came from the other side of the phone rang loudly in the silent room I was in. My heart sank, my head became faint, and my vision became blurred from warm, salty tears. I remember asking this question in that dark moment: “Why God?”

I am sure most of you who are reading this have experienced a moment of betrayal, defeat, or rejection. We praise God and raise our open hands to our Father when He bestows good gifts in our fruitful seasons. Yet, we clenched them tight and allow our hearts to turn cold towards Him when we get the news of a returning cancerous spot, a co-worker obtaining the promotion you have worked endless hours for, or the endless bills that keep piling onto your life, with no end in sight.

I have not written in awhile, but today I felt the Lord push me towards Hebrews today. This book is full of knowledge and wisdom about the prospects of faith, and how it surpasses all human understanding. Today, I am writing straight from Hebrews 11: “By Faith.” In this chapter, what we can take away is that, “By faith we understand that the universe was created by the word of God, so that what is seen was not made out things that are visible.” Hebrews 11:3. This verse bursts with such spiritual truth! Faith is trusting in the invisible. The author of this chapter gives vivid examples of those who chose to have faith in what seemed to be humanly impossible.

Abel had faith when he gave God a sacrifice more acceptable than Cain. He was commended by righteousness. Though he died physically, he is forever alive spiritually and speaks forevermore to God’s people.

Enoch had faith when he walked closely with God (Genesis 5:24) and was taken up to be with God, not through normal human death, but through a state of blessedness because he had pleased God so much. There is no possible way to have faith in God without pleasing him or believing that He exists and that there is a reward for those who seek Him.

Noah had faith when he heeded God’s warning about flooding the Earth, he had constructed the ark. Noah condemned the worldly ways and sought to have faith in God. Noah became an heir of righteousness because of his faith.

Abraham had faith when he obeyed by going into the unseen to receive such an inheritance God had promise him. He had no idea where he was going, but his faith led him the Promise Land, and his offspring. Sarah had faith in the birth of her son.

All of these biblical examples died in faith, not by receiving what they wanted, but seeing things far beyond their comprehension and that they were strangers of the world. We are promised such a faith if we choose to believe and accept it.

I do not know what valley or season you’re in, but I do know this, we follow a God who is ever merciful, ever faithful, ever seeking our hearts. He will close doors that our hearts want desperately opened so we can walk through His already proclaimed promises. “Let us hold unnervingly to the hope we profess, for he who promised is faithful.” Hebrews 10:23 ESV.

“And all these, though commended through their faith, did not receive what was promised, since God had provided something better for us, that apart from us they should not be made perfect.” Hebrews 11:39-40 ESV.

Thank you for checking out my blog! I hope you get some motivation and insight for your personal walk with God! If you would like to contact me personally, my email is melrosejordan17@gmail.com or add me at my Facebook page: Melodie Rose Jordan. I am praying for you all!
melrose
Powered by WordPress.com.